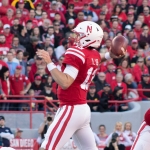 Former Nebraska quarterback Tanner Lee appeared on CBS Sports Radio’s Jim Rome Show on Wednesday afternoon to give an update on his NFL draft preparations and reflect on his decision about leaving Nebraska.

Lee mentioned once again that head coach Scott Frost was one of the most helpful persons in his decision process, especially after a difficult 4-8 season.

“It’s tough,” Lee said about 2017. “I mean, there’s really no way around that. It was just hard. Tough season, didn’t go the way we wanted to go. Changes were made, and they brought in Scott Frost. You can’t ask for a better coach coming in. He won Coach of the Year in every category you can imagine, and I got to know him a little bit, just talking through this process with him a little bit.”

Lee declared for the draft back on Dec. 28., but reassured that those coming back this season are in for a much better season.

“They’re in great hands,” Lee said. “(Frost) is a coach I’d love to play for. I got to play for a lot of coaches and a lot of different position coaches in my career, and in the few conversations I’ve had with him, my guys I left in Nebraska are in great hands. I’m excited for them. You know, he’s just the ultimate players’ coach. The guy just gets it.”

Lee said he’s currently working out in Los Angeles with quarterbacks aficionado Steve Calhoun, preparing for the NFL Combine in Indianapolis. The combine for quarterbacks is on March 3rd.

When asked if he belongs in the same echelon as some of 2018 likely first round picks like USC’s Sam Darnold or Oklahoma’s Baker Mayfield, Lee is confident that his level of work is at least comparable to this year’s top prospects.

“Those guys are unbelievable athletes,” Lee said. “They’ve done a lot of great things in college football. But to me, yeah, I think I’m very comparable to them, especially my skill set and my arm talent. Things I’m very confident in. I feel I could walk on the field and play and throw with anyone. I don’t want to sound cocky or anything. I think it’s just confidence.”